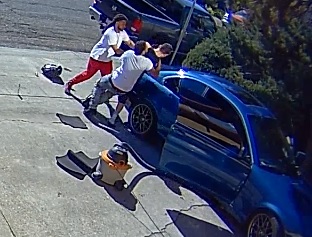 OAKLAND — Police said a person has been arrested, but no formal charges have been filed, in connection with at least two East Bay armed robberies, authorities said.

Oakland police said on Twitter that one of two suspects sought in the armed robbery Feb. 10 in the 2000 block of Damuth was arrested in Los Banos by California Highway Patrol officers after a statewide alert by investigators.

Richmond police shared this image Wednesday, Feb. 12, 2020 of a man sought in connection with an armed robbery Monday in the 12500 block of San Pablo Avenue. (Courtesy Richmond Police Department)

That suspect was also sought in connection with an armed robbery a few hours later on San Pablo Avenue in Richmond.

According to the spokesperson, the suspect had cut his hair and made plans to leave the state, but admitted his role in the robberies to investigators.

A second suspect in at least one of the robberies is still outstanding, police said.

1 of 2 brazen armed robbery suspects caught on surveillance video is behind bars. 1 incident happened 2/10/2020 in the 2000 block of Damuth in #Oakland another in the city of #Richmond In an attempt to avoid being caught the suspect cut his hair and planned on leaving the state.

He was arrested in #LosBanos by CHP after #OPD investigators issued a statewide BOLO. The suspect admitted to his role in the robberies. The case is headed to the Alameda Co. DA’s office. The 2nd suspect is still outstanding. No additional information will be given at this time. pic.twitter.com/6tIlJVfhlp