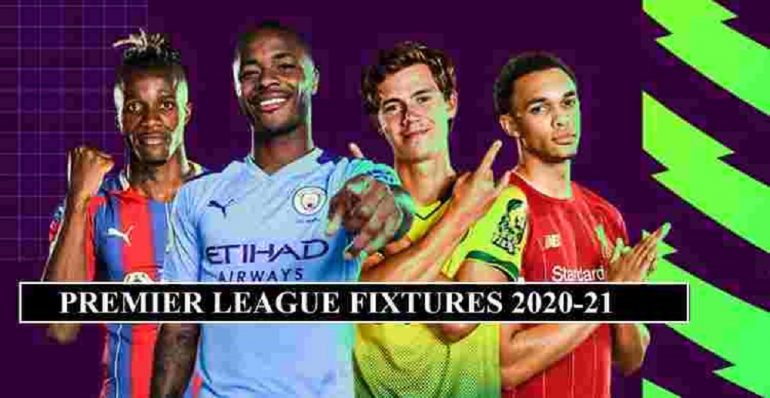 Today we’ll be talking about Premier League 2020-21 Fixtures. As the Premier League 2019-20 campaign has officially come to an end, fans have been waiting for the time when Premier League 2020-21 starts. So, just have a seat and read along as we tell you everything about the coming season of the English Premier League 2020-21. After the play for the previous season was resumed on 17th June 2020 which was delayed due to the COVID-19 pandemic, every club had to play 9-10 matches within a month. The last game was played on 26th July, where Manchester United sealed their spot for the Champions League after defeating Leicester City 2-0. Then, the season ended as Arsenal bagged the FA Cup with a 2-1 victory leaving Chelsea empty-handed.

The English Premier League 2020-21 will start on 12th September 2020 which is a Saturday. The football association was looking for a start in August. But, England has their UEFA Nation’s League fixtures against Denmark and Iceland in the first week of September. However, the clubs were also in favor of a mid-September start as it gives them time to get some rest. Usually, the teams are given a three-month break after the end of the season, before the new season begins in August. As the players have just finished the season, they will definitely look for a month of break. Given that they had to play nearly 10 games within the span of a month, it is understandable.

Premier League 2020-21 will be finishing on 23rd May 2021. In short, the normal cycle will be resumed with efficiency. Premier League 2019-20 saw three teams being relegated. They were Norwich City, Watford, and Bournemouth. The clubs replacing them will be Leeds United, West Bromwich Albion, and Fulham. The rest of the teams are going to be the same. Liverpool will surely be looking to defend their title as they have won after the long wait of 30 years. However, other clubs also look strong. Manchester United had their position shot up on the points table since the signing of Bruno Fernandes. Manchester City and Arsenal also look strong as one paves its way to the UCL quarter-finals while the other just won the FA Cup. The League is surely going to be thrilling and the fans cannot seem to wait for enough for it.

Now, normally the fixtures for the league are released about two months before the start of the season. However, that is not going to be the case this year. Right now, no date has been confirmed by the football association. But the fans can expect the fixtures to be released by mid-August (next week probably) or even the end of August. Either way, it is going to be difficult for the clubs to brace themselves up. There is going to be a very short period of time for them to train. In other news, the Summer transfer window is now open. It will be open till 5th October 2020. So, the teams will be probably looking to sign their potential targets as soon as they can. In fact, many have even scouted some talents already.

The association has decided that the fans will not be allowed back to the stadiums yet. Precautions will be taken to control the COVID-19 pandemic. The League will be starting just three weeks after a team is crowned as the Champions League winner. So, the fans will not have to wait for much to see their favorite players back in action soon. Let us know in the comments section about your favorite club.