Netflix’s Code 8: Top 10 Mysteries Left For the Sequel to Answer

The Sandman Show of Netflix has found its lead as Tom Sturridge. The series will be based on the comic book of the same name that is written by Neil Gaiman. The production and filming are set to start in October after it was previously postponed due to the Covid-19 pandemic and lockdown.

The Sandman is a very popular and much loved comic book that ran from about 1989 to 1996 and had 75 issues. It was printed and produced by DC’s Vertigo imprint, and Neil wrote all of these books. The Sandman, almost every time, had top rankings and became one of the most beloved comics over time.

The Story of The Sandman

The lead character and protagonist is the Sandman, who is also known as Dream or Morpheus. He is a member of a group called The Endless that is a group of pseudo-gods. All these pseudo-gods are a personification of abstract human concepts like death, despair, dream, desire, destruction, destiny, dreams, and delirium.

Tom Sturridge got this role by winning against Tom York and Colin Morgan. This would not be Tom’s first project with Netflix. He has already worked for the streaming platform with the satirical horror film Velvet Buzzsaw. The most recent project of Sturridge was the series, Sweetbitter, by Starz. The casting process for Sandman had begun earlier before the lockdown, and now everything is ready to start production again.

Netflix has decided to keep 11 episodes for season 1 of the series and has ordered the same from Warner bros. TV and Neil Gaiman. Season 1 is supposed to cover the volume 1 of the comic book series that had the ‘Preludes and Nocturnes’ and probably a little more than that. Niel Gaiman has always been seen saying that this a comic book that should be made into a TV series but the previous attempts of making the series had all failed due to the insane complexity of the comic book story.

The world has evolved since the 90s, and TV production has become advanced and extraordinary that has made it possible to make the series. The Series portrays a very expensive and art-like life that will be very unique to see, and most of the world where the story takes place looks like a dream that will be refreshing for the audience. 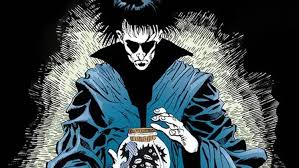 The series is supposed to be a long venture with lots of seasons if the audience allows and thus the casting of Tom Sturridge is perfect for the role. Tom has played some of the best roles and portrayed his talent with extraordinary acting skills, and we believe that he can very well play the melancholic role of Dream as well. All the fans of this 90s comic book series would be excited to see their beloved comic book turn to a series this time. The series is set to premiere in 2021, and we can’t be more excited.