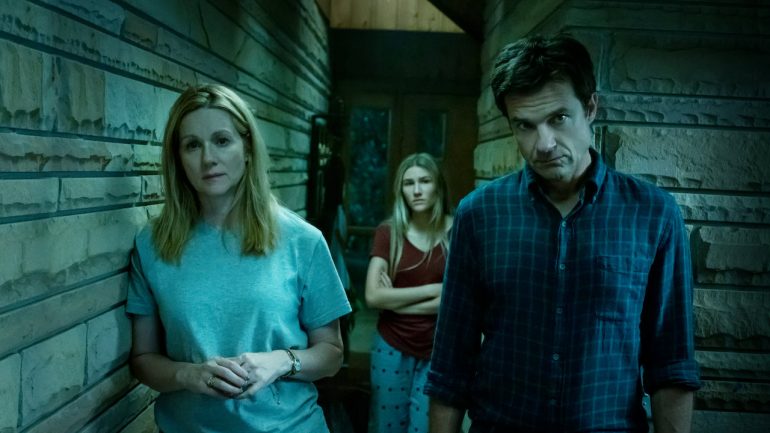 Ozark season 4 is finally greenlit by Netflix and thus, it is coming back on the streaming giant. The new season is made up of 14 episodes. They will be divided into equal halves of seven episodes each. Bill Dubuque as well as Mark Williams have co-created the series. It has regularly ranked among the best shows available on Netflix. The genre of it excels in the department of crime as well as drama. Season 4 of the show was divided into two parts because it would ease the creators to make it.

Nevertheless, we can think that Ozark season 4 part 1 will release sometime in 2021 only if filming starts in January. And for the second part, it might release sometime in 2022 for sure. Previously, in one of his interviews, Jason Bateman told everything about the production process on Ozark. He said the crew and the cast require approximately 11 days to shoot one episode. This comes as a package deals with two week preparation time.

A list of cast members has been confirmed to come back for Ozark season 4. Here we have provided it for you. The names include Jason Bateman reprising the role of Marty Byrde. Laura Linney enacting the character of Wendy Byrde. Sofia Hublitz playing the part of Charlotte Byrde. Skylar Gaertner reprising the role of Jonah Byrde.

Well, you guys should also know that there were new casting announcements this month. Thus, we have Alfonso Herrera from The Exorcist joining the list as Javi Elizonndro. This character is a member of the Navarro family who manages his reputation by being an obedient lieutenant while scheming to take over the cartel owned by his uncle. Then we have actor Adam Rothenberg whom we can all remember from Ripper Street. He will play the part of Mel Sattem. Mel is a cop who fell from grace and now works as a P.I.

Simpsons Season 32 Is Now Airing on Hulu and Fox Network

The man has no problem enjoying the chase and will not rest until he finds out the whole truth. Felix Solid, the actor whom we have seen in Charmed, will join Ozark enacting the character of Omar Navarro. Damian Young has been in Homeland. He will join the latest installment of this show as Jim Rettelsdorf. Bruno Bichir from Narcos will join the show as a Priest from Navarro. CC Castillo from Outer Banks show will reprise the role of Sheriff Guerrerro. Katrina Lenk from The Band’s Visit as Clare Shaw.