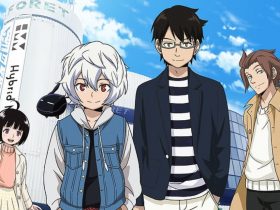 On May 30, voice actress Ayaka Nanase reported on Twitter that she had purchased a Honda CT110 scooter. It turns out that Nanase plays Reiko in the animated adaptation of Super Cub, who drives a similar scooter.

“The other day, I welcomed this CT110! I want to drive safely and take care of myself. I hope we can get along well!”

Upon learning of this, illustrator Maruyo couldn’t help but be surprised and dedicated an illustration to celebrate his new acquisition:

“Today the ninth episode of the anime is broadcast. I leave a “Reiko x CT110”. Congratulations to Nanase-san, who gave him a voice, for getting a CT110! ”

Not only did Nanase decide to buy a motorcycle, but Yuki Yomichi, who plays the protagonist Koguma and who is actually her industry debut, is also a big fan of this type of vehicle, and shared a photo on the onboard networks of what looks like a Honda TL125. “ This is my favorite, ” wrote Yomichi.

Super cub is being played on Japanese televisions and will have 12 episodes. In the end, the Super Cub anime will release on August 25th a compiled in a single-volume DVD/BD. The volume will cost $264.

The story centers on Koguma, a high school student in Yamanashi. She has no parents, friends, or hobbies and her daily life is empty. One day, Koguma gets a used Honda Super Cub motorcycle. This will be the first time she has been riding a motorcycle to school. Running out of gas and avoiding an accident has become a small source of adventure for Kagura’s empty life. She is satisfied with her new life, until her classmate, Reiko, says that she also has a motorcycle.

Koken and Hiro have published the novels through Kadokawa Publishing’s Sneaker Bunko label since May 2017, with six volumes published to date. A manga adaptation of Kanita has been published in Comic Newtypb magazine since December 2017.