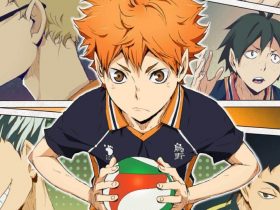 The Quarantine Stream Why am I so excited about Haikyu an anime about high school volleyball.

The original robot animation work ” Boundary Warfare Machine, “which BANDAI SPIRITS and SUNRISE BEYOND have teamed up with, will be broadcast and distributed sequentially from October 4, 2021 (Monday). Before the broadcast, the particular video at the first episode was pre-distributed on the BANDAI SPIRITS official YouTube channel from Wednesday, July 21.

“Boundary Battle Machine” is set in Japan, which was divided and ruled in 2061. Controlled by four significant economies globally, Japan is at the forefront of the world where the humanoid special mobile weapon AMAIM introduced by each economy is striding. One day, Amou, a boy who loves machines in the wake of the encounter with the self-reliant AI Guy, will devote himself to the battle to regain Japan.

As a characteristic video development of this work and broadcasting on terrestrial broadcasting, a hybrid video development of archive distribution on YouTube is carried out. In addition to real-time viewing on terrestrial broadcasting, we will develop an archive distribution on YouTube that can be viewed anytime and anywhere simultaneously, responding to diversified viewing environments, aiming to have more people enjoy this work.

Before the broadcast from October 4 (Monday), advance distribution of the unique video at the beginning of the first episode of this work will start from July 21 (Wednesday)! It is a special video of about 11 minutes, including the opening video at the beginning of the story that depicts the encounter between the machine-loving boy “Amou Shiiba” and the independent thinking AI “Guy.” Please look forward to the broadcast in October while feeling the world view of the work in this video! Also, in the “Monthly Hobby Japan September issue” (published by Hobby Japan) released on July 21 (Wednesday), the serialization of the Gaiden story “Borderline Fighter Frost Flower” of “Boundary Fighter” has started! Attention is paid to Gaiden, which develops a level different from the anime “Boundary Warfare Machine” with various examples and sentences with a sense of reality.

“Boundary fighter” plastic model series that reproduces the mechanism that robot animation does not have also appears one after another! After making corrections to the lines of detail and pursuing the shape, and after structural verification of 1/1 scale with a total height of about 10 m, the work setting, the 1/72 model will be three-dimensionalized, aiming at “genuine.” Check this out as well! (C) 2021 SUNRISE BEYOND INC.