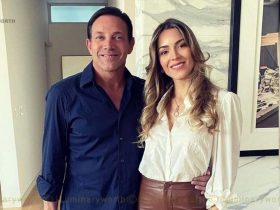 Who Is Author Jordan Belfort Girlfriend?

What does Courtship mean? Courtship is the period wherein a couple gets to know each other. Preceded by a proposal, courtship traditionally begins after a betrothal and concludes with the celebration of marriage. A courtship may be an informal and private matter between two people or maybe a public affair, or a formal arrangement with family approval. Traditionally, in the case of a formal engagement, it is the role of a male to actively “court” or “woo” a female, thus encouraging her to understand him and her receptiveness to a marriage proposal.

What Is ‘The Courtship’?

NBC’s new dating show is all about a young girl on a journey to find love in a Regency-era England setting. The film features romance, carriage rides, and ballroom dancing, like Bridgerton.

The latest dating series from Peacock comes with a royal twist. The Courtship, which was previously announced as a Regency-era-inspired dating show set in modern times, is almost here! Formerly known as Pride & Prejudice: An Experiment in Romance, NBC takes a closer look at what it means to live all your Bridgerton romance dreams.

The Courtship follows one woman who is “looking for her duke” and will embark upon “the ultimate social experiment in romance.” Now that we know the details, fans are very curious and excited about when The Courtship’s release date will be.

When is ‘The Courtship’s’ release date?

Taking a page from the successful Netflix series Bridgerton, the series will follow a “group of eligible suitors” who are transported to England in an attempt to woo a lucky bachelorette, Regency Era-style. The show’s official press release notes that the show’s setting is “housed in a castle in the countryside, set on a beautiful backdrop of rolling hills, the heroine and suitors will experience that with which dreams are made.”

Activities and dates fans can look forward to in the show include carriage rides, boat rides, archery, and crafting handwritten letters for communication. At the show’s end, the leading lady and her suitors will discover if they have found true love…

Fans of the show can expect its premiere on NBC on March 6 2022 at 8 p.m. Episodes can be streamed through Peacock the next day, and they will be released on a weekly basis. At present, there is no word on how many episodes the show will have, or if there will be future seasons. Fans will just have to tune in to find out more!

Who Is In The Cast Of ‘The Courtship’?

The Courtship features the heroine, Nicole Remy, a young 25-year old girl who is on a journey to find love. She was introduced to a group of 16 suitors who vie win her heart.